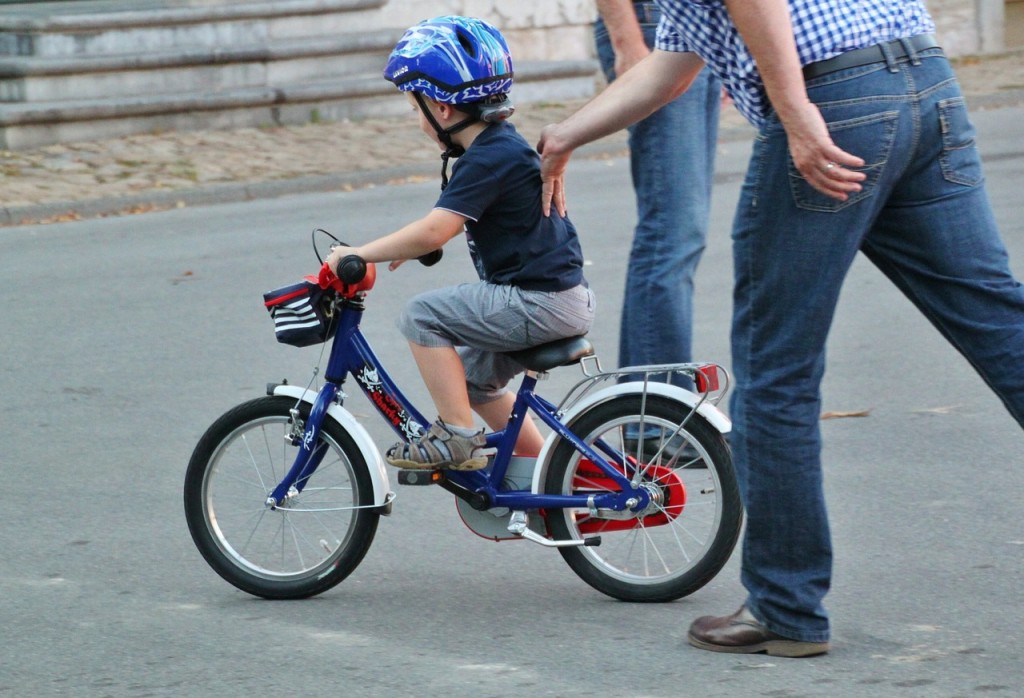 If you let go of your business and stepped away, what would happen to it? Would it happily continue to generate revenue, grow and support its customer base? Or would it start to tremble and stress? Would cracks start to appear and would plates that you help keep spinning, start to crash to the ground?

Unfortunately, for most businesses cracks would appear, plates would smash and the business would eventually break. These businesses are vulnerable and many thousands are no longer here because they couldn’t function without their owners in them.

Fortunately it doesn’t have to be this way and a key part of your leadership and the stewardship of your business is in preparing it for the day you can step away and it not break.

Of course, if you own a small start-up or young business it needs you in it because its progress is directly proportional to the effort you put into it and the actions you take.

But at some point you have enough profit to be able to think about what you can do to reduce its dependency on you. Before hiring employees, you can start to outsource some of this effort. The more you can do this the stronger your business becomes and the risk of it breaking, should you step away, diminishes.

Even medium-sized businesses with all its assets, resources and capabilities can struggle and strain and possibly break if their leaders were to step away.

In these cases, its not funds that prevent the owners from being able to step away – it’s the owners themselves. Sometimes there can be a Tolkien-type problem where the owner struggles to let go of his or her “precious”. The business is their baby and no one can look after it as well as they can.

This is an understandable sentiment but it doesn’t help the business and neither does it help the owner who carries all the stress and strain of holding it up.

If you are struggling to let go of your business because you are worried that it’ll break then it probably will. My advice is, don’t let go just yet but focus on getting it ready so that when you do let go, no harm will come to it.

To give you some ideas on how you can do this, here is a case study of how I helped the owner of a care home step away from her business.

As well as the owner, Jane (name changed) was also the Registered Manager of the care home and had been for over 10 years. Jane wanted to grow her business and open other homes, but she didn’t see how she could, when she was such a key element in her current home.

Her desk was piled high with work that she needed to get through in order to keep her beds full and the business working. Every day she was brought issues that only she could resolve.

Jane had been successfully running the home profitably, with full beds, happy residents and relatives, loyal staff with low turnover and excellent CQC inspections. But if she took a holiday her people would panic and during her holiday was often on the phone instead of relaxing with family and friends… and she always returned to a desk full of issues and sighs of relief.

When I met Jane we talked through how she could open a new care home without negatively impacting her current one. Jane understood that, in order to expand, her current care home had to run successfully without her constant attention. She had to be able to let it go and know that it wouldn’t break so that she could focus on her business expansion plan.

The problem was that so much of how the business needed to run was in Jane’s head. And it wasn’t simply a case of hiring someone to be the Registered Manager because even an experienced person would face the same challenges that Jane did.

The business needed to run well without the constant involvement of the Registered Manager. That way, instead of constantly fire fighting, the Registered Manager could focus on making sure standards were maintained, beds were full, external relationships were strong, improvements were made and targets met.

There were 2 clear phases to this project:

I worked with Jane and a core team from across the home to carry out an assessment of the current situation. Even without the assessment we knew the business relied too much on Jane – we knew it needed to be systemised and the knowledge in her head needed to be accessible by her staff.

But what the assessment did do, was drill down into specific problem areas, which if addressed, would allow Jane to step away. 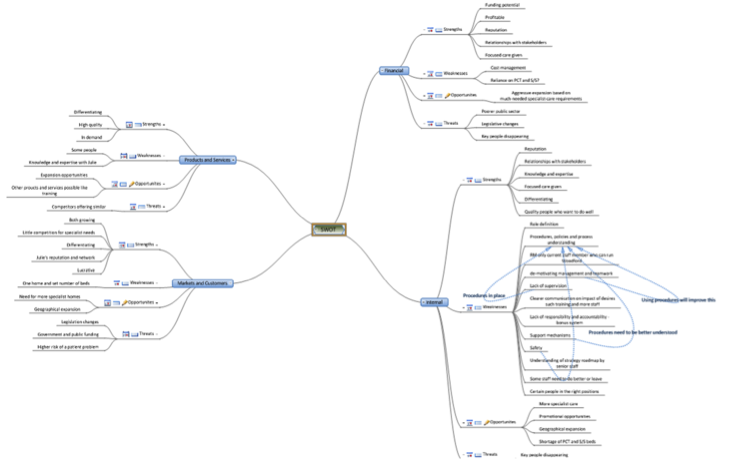 This assessment resulted in a one-page summary, which revealed weak areas and potential risks and threats to the business. (The image is too small to read but is there to show the kind of one-page summary I describe.)

We mapped out how Jane’s home should run and, with the help of the assessment, identified areas that didn’t run well.

For example, even though the overall care being given was at a high standard and Jane had some good, loyal staff, there were problems with people disrupting others, calling in sick, making mistakes, taking too long and so on. Basically there were good people who went beyond in order to compensate for those who did the bare minimum and this was impacting morale and motivation.

We made a number of changes including changing the organisation structure so that it became clearer as to who was responsible for what. And the new structure also gave good people much better career opportunities. With clear roles and responsibilities people were more motivated and had a career path and higher opportunities to train and aim for.

So that was a higher-level change that would result in big improvements over time – but we still needed to address the day-to-day problems that were happening on the floor.

To help reduce mistakes and the impact they had on clients, relatives and other staff, we created process flows to show how a specific task should be carried out. These were easier to teach, to learn, to understand, to remember and to test against. It was vital to carry out these tasks well because they involved vulnerable adults who, with dementia and mental health problems, could easily become confused and upset.

For example, below is a task for bathing a client using a hoist. At first glance it may look over complicated but what’s key here is that the process flow includes how and when the carer should speak to the client to make them aware of what is going to happen and to check that they are ok and comfortable. 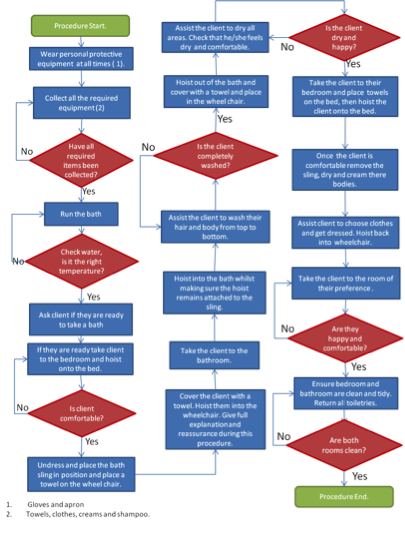 Over time, each department created their process flows and training new people became more straightforward as each new person received a manual of process flows, which showed them, step-by-step, all the things they needed to know.

To help bring out the best in, and motivate, the good staff we introduced a daily scorecard system where managers and shift supervisors scored each member of their team. This helped monitor performance and spot areas of concern early on. And, because of this system, supervisions became more accurate, because they were evidence-based and sessions more productive and useful to both. 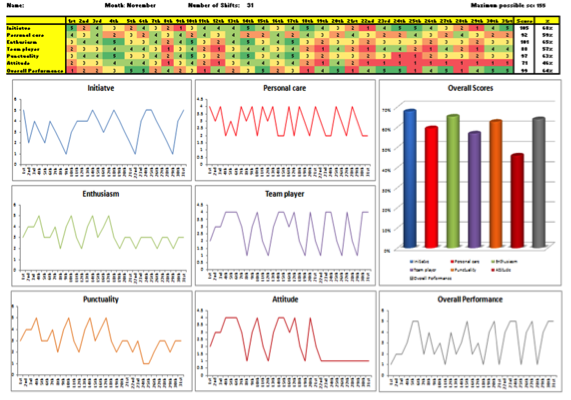 Rather than being a resented system, those who wanted to give their best and who had the right values (which is particularly important when working with vulnerable adults) welcomed the scorecard.

With better training, clearer roles, responsibilities, real career opportunities, ‘how to’ process flows and objective performance scoring and reviews that were linked to a quarterly reward program, many of the problems that had been previously landing on Jane’s desk became rare occurrences or disappeared entirely.

With these changes in place the home ran more efficiently and effectively and Jane was finally able to appoint a Registered Manager and step away.

A number of other initiatives and improvements were made, which resulted in motivated people performing their jobs well, managers empowered to do more within a framework that guided and supported them and in Jane no longer being the oracle, whose wisdom was constantly sought.

Within 6 months of starting this project together, Jane was able to step away, knowing that her home would run well, the business would continue to be profitable and the quality of care remain at a high level.

A year after starting the project, Jane opened her second care home and with her first home systemised, she had a blueprint to copy. Being a brand new home, Jane became Registered Manager so that she could use her experience and strong regional reputation to fill the 2nd home, which she did 3 months ahead of schedule.

I’ve worked with Jane on a few projects to help further improve the running of her homes, to help her create the right differentiating strategies and to bring out the leaders in her people.

The result of all this is that Jane…

Once the right systems were in place Jane could let go of her business and instead of breaking, it carried on just fine. Jane could then focus on making her business stronger and on creating a long-term growth strategy, which is still working well for her.

If you let go of your business would it break?

For extra guidance download my free report, “How Strong is Your Business?” now.

Related posts:
Your Biggest Risk Is Also Your greatest Asset
Increase Your Productivity